Shooting for the Moon with Newborn Screening 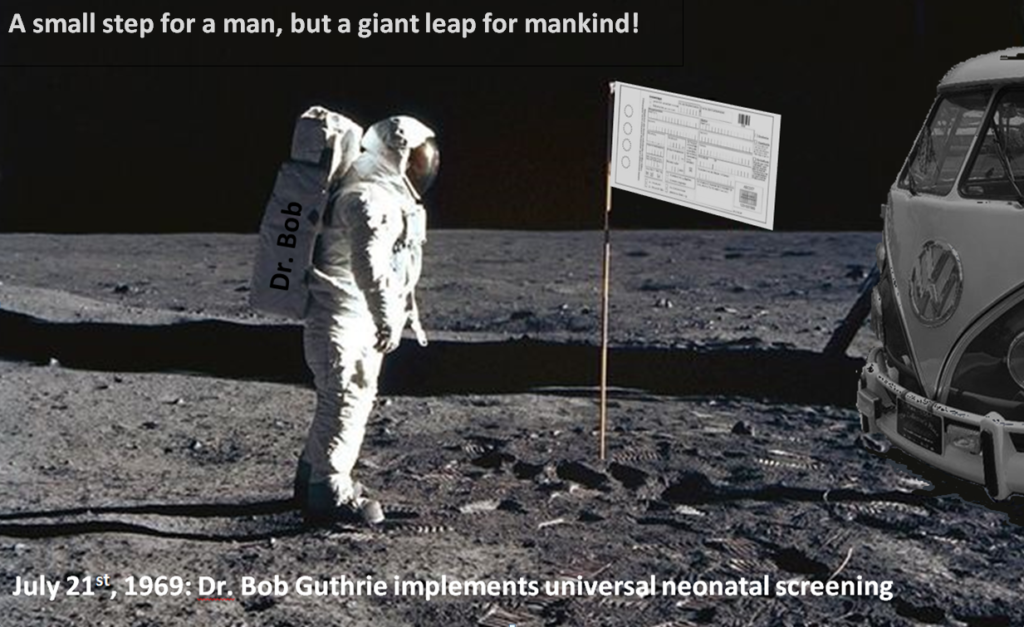 That’s the German translation of the famous quote from astronaut Neil Armstrong as he stepped on the moon 50 years ago, July 20, 1969.

It’s how I heard the historic moment “one day late and in German” as I was in Heidelberg with my crazy family camping in two VW buses on the Neckar River.

It was one stop on my father’s round-the-world mission to bring newborn screening to other countries and take his wife and six kids along for the ride.

The image of the moon landing above portrays that trip and plays on the crusade of “universal newborn screening” which became my father’s quest after proving his new dried blood spot filter paper test could detect PKU and prevent mental retardation if applied at birth.

His idea for newborn screening happened in the same era as the race to the moon. It started as a single pursuit to detect PKU early before the metabolic condition led to irreversible brain damage. It’s evolved into a more comprehensive and complex screening system capable of detecting more than 50 different conditions. And it’s been adopted by dozens of countries as an important public health preventative measure.

The wonderfully clever Tobias Hagedorn of the European Society for Phenylketonuria and Allied Disorders Treated as Phenylketonuria created the funny moonshot montage. Four years ago, he invited me to talk about my father’s work at a conference in Berlin. When I recently wrote to him asking about the German translation of Armstrong’s quote, I told him my family ended up watching the moon landing in the home of Prof. Horst Bickel.

Horst Bickel is the German doctor who developed the low “phenylalanine” diet which children with PKU need in order to develop normally.

My father and Dr. Bickel became good friends and colleagues and they happen to have the same birthday, June 28. It’s now celebrated every year as International PKU Day.

Newborn screening describes various tests that can occur during the first few hours or days of a newborn’s life and have the potential for preventing severe health problems, including death. Newborn screening has evolved from a simple test using four drops of blood from an infant’s heel to a more comprehensive and complex screening system capable of detecting over 50 different conditions.

My dad anticipated the historic moon landing day and packed a small television set that could be plugged into the VW cigarette lighter. He invited others at the campground to watch the live images of Apollo 11 extremely early in the dark morning. Only the TV didn’t work. And the moon landing had happened the night before. So Dad called on his friend Dr. Bickel and we watched the replays at his house on a color TV! My sister, Anne Guthrie, remembers eating jello. I also recall the Bickel’s laughing at the bad German accent the English guy was using, but that we could catch some of the English as it was being translated.

“I don’t remember the flavor of the jello though.”

To this day, I am not quite sure how my parents coordinated this bizarre work-family trip ’round the world in two VWs buses. It entailed loading and unloading the vehicles on three ships, driving thousands of miles, pitching a tent countless nights and keeping us kids from physically harming each other. My dad loved to exclaim, ‘Just another case of sibling rivalry.’ I don’t think it solved any argument but he loved to announce it in an all-knowing tone.

Prior to the European trek, we lived in New Zealand for nine months eating meat pies, fish and chips and Cadbury chocolate while longing for hot dogs and peanut butter. Oh, and some of us kids went to school wearing uniforms while our Dad worked with New Zealand doctors to establish newborn screening for the South Pacific.

Being soooo young at the time, my memories are rather spotty. But some sights engrained themselves on my 9-year-old brain. I stared in awe at Michelangelo’s La Pieta sculpture in the Vatican (before the bulletproof glass) and think I grasped the concept of great art in my pea-sized brain for the first time.

I also remember the fuzzy TV images showing the moon’s surface, an American flag and men in moon suits.

I remember not understanding the language of the broadcasters. And I know I was somewhat perplexed about how the whole world looked up at the same moon up at night no matter the map coordinates of respective countries (which Dad mercilessly pointed out on an inflatable globe that traveled everywhere with us.)

What I really couldn’t comprehend was how humans were walking on the moon and how they had even figured out how to get there. So now I know five decades later everyone was thinking the same thing, even Walter Cronkite, my Dad’s favorite and trusted TV news source.

I’ve been watching and enjoying many of the 50-year retrospective programs and perspectives about the 1969 moon landing. It makes somewhat more sense in English. But my peabrain still fails to comprehend how Buck Rogers’ fantasy feats ever became reality.

I learned much from my mad single-minded scientist of a father — although it took me decades to realize his most important lesson:

Shoot for the Moon. You Might Just Get There.